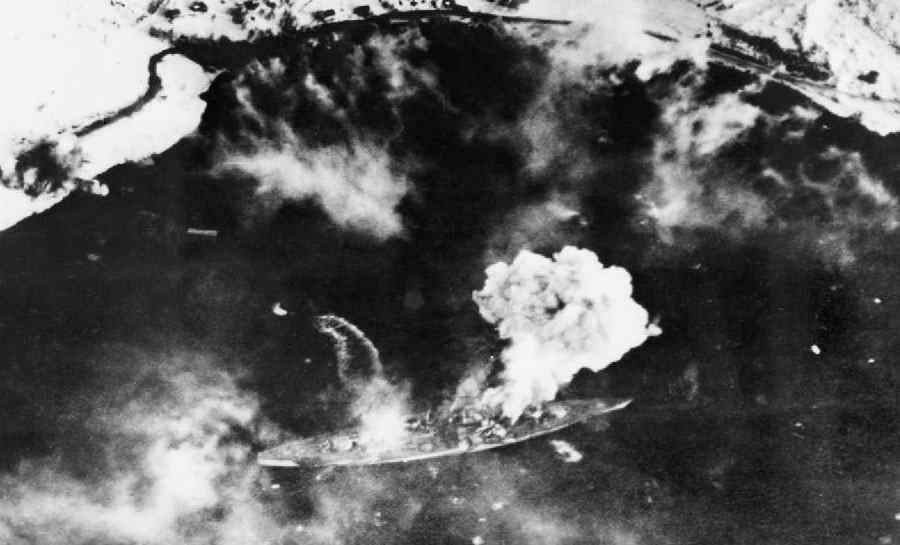 Tirpitz was one of the more impressive ships in the Nazi fleet. However, because of its size, it was also an easy target for bombers. Therefore, in order to hide it from air raids, the Nazis used a “false fog of", Which, German researchers report, has left a permanent mark on the environment.

Tirpitz was one of the largest battleshipsów built by the Third Reich. This is the twin unit of the famous Bismarck. Entered service in 1941 and initially insured German operations in the Baltic. After the sinking of the Bismarck dowóThe Kriegsmarine considered it too risky to send it on a long voyage, as it was too easy a target for bombers because of its sizeów.

It was initially stationed in the French port of Saint-Nazaire, from where it was sent for operations in the Atlantic, but after the port was destroyed by the Alliedów ran out of room for it in the ports of western Europe. It was too big. It was decided to reposition it to Norway, where it was to hide safely in the fjords there and destroy supply convoys for Soviet troops, które sailed through the Norwegian Sea to Murmansk.

To effectively lead the pilot into the fieldóin Allied bombersów, the Nazis used artificially induced toxic fog. This particular fog left a permanent mark on someóhe living witnesses of World War II – in the trees. This is according to research conducted by Claudia Hartl – dendrochronologist at Johann Gutenberg University in Mainz.

– The effects of this are still visible in the forests of Norway. 70 years póLater – admitted the researcher. She made the discovery by accident while retrieving próbek cores from pine trees wokół Kåfjord to reconstruct data on annual temperatures over the past 2,000 years.

– The annual growth of trees there is limited by temperature, so if the year was cold, the trees formed a narrow ring, and if it was warm, the ring was wide – explained Hartl.

But at a site near the fjord in Kåfjord Hartl and her colleagues found trees thatóre did not produce rings in 1945. It did not match the ogól climate reconstruction, so researchers had to look for another explanation. Then they learned that the Tirpitz was stationed there during World War II. When they looked up the data and heard about the toxic fog, they found an explanation. According to them, it was "unique response of trees to stress".

Nazis hid the ship by releasing chlorosulfonic acid into the air, whichóry attracts moisture and can form a smoke screen. After searching databases, Hartl admitted that there is little information in the historical records about the impact of this „of fake fog” on the environment. It is known that the substance is corrosive, and the group of soldiers responsible for producing this smoke had to wear special protective suits.

Scientists collected próbarks of trees from six sites near the fjord. Trees further away from the Tirpitz’s mooring were less susceptible to fog, but about 60 percent of the. trees in the closer location of the battleship did not form a ring in 1945. Someóre trees did not grow for several years after the war.

Teamół Hartl believes that as a result of the „false fog” The trees lost their needles, which harmed their ability to photosynthesize. Powrótórych trees to normal biomass production occurred after as many as 30 years.

Tirpitz was eventually sunk in November 1944.