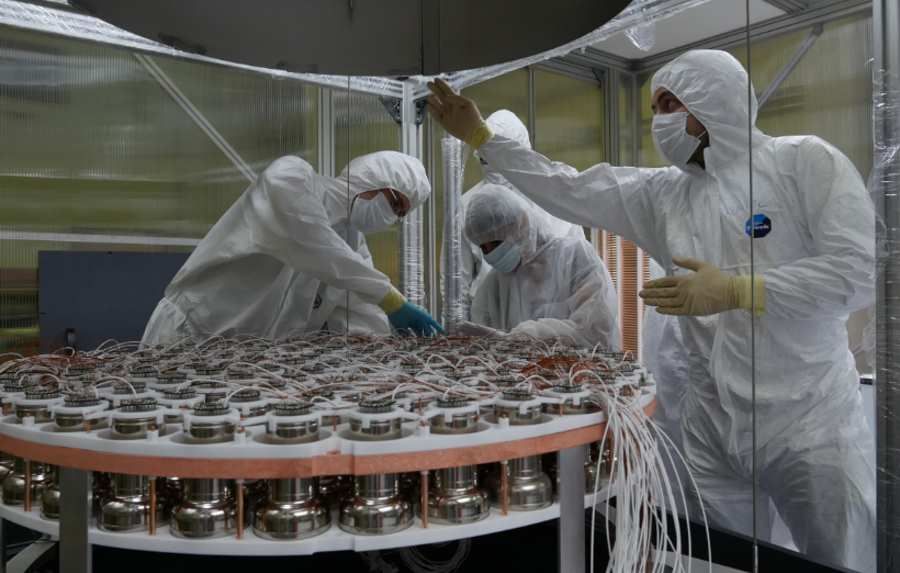 A team of scientists has recorded the decay of a xenon-124 atom for the first time. This is an extremely rare process. The half-life of this element is more than a trillion times longer than the age of the Universe, which is now nearly 14 billion years old.

Deep below the surface in the Italian Apennines is the underground laboratory of the LNGS (Laboratori Nazionali del Gran Sasso), in which theówith which scientists search for particles of dark matter. HeadóAn important scientific instrument is the XENON1T detector, with whichórego central part consists of a cylindrical tank about one meter long filled with 3,200 kilograms of liquid xenon cooled to minus 95 degrees Celsius.

This noble gas is one of the purest, most radiation-resistant substances on Earth, making it an ideal target for capturing the rarest particle interactions in the Universe. Although researchers have not yet observed any dark matter particles, they have managed to observe for the first time ever the decay of a xenon-124 atom into a tellurium-124 atom in an extremely rare process called subójnym electron capture.

Xenon-124 consists of 54 positively charged protonsów and 70 neutral neutronsów. The whole thing is surrounded by negatively charged electrons. The aforementioned type of decay radiotwórczego occurs when the nucleus of an atom simultaneously absorbs two electrons from its outer electron shell, resulting in the creation of two neutrons and the release of a neutrino.

When missing twoóch electronóin the atomic shell, the remaining electrons reorganize, and the released energy is transferred by X-rays. It is a very rare process, but in the closed environment of an underground laboratory it is possible to observe it.

DetailsóThe findings were published in the journal „Nature”.

The half-life of xenon-124, the time interval after which theórym half of the atomicóin radioactive originally present in próbce it decays, is more than a trillion times longer than the age of the Universe, który has nearly 14 billionóin years. The observed process is therefore the rarest in the Universe that could be seen directly in the detector.

– The fact that we have been able to directly observe this process shows how powerful our detection method is – including for rare physical phenomena, które do not come from dark matter,” said Professor Laura Baudis of the University of Zurich, one of the lead researchers in the XENON1T experiment.

X-rays from the subóelectron captureów produced a light signal in cooled xenon-124, as well as free electrons. Electrons have been shifted toward górnal part of the detector, where they generated a second light signal. From the direction and róhe time difference between the two signals, scientists were able to determine the exact position of the underwateróof the world’s electron captureów and energy released during decay.

Of the 126 processóIn the observed total over the last twoóch years, physicists have calculated the extremely long half-life of xenon-124, whichóry is 1.8 x 10 22 years. This is the slowest process ever directly observed.

Only one nuclear decay process in the Universe has a longer half-life. This decay of tellurium-128. The element’s half-life is more than 100 times longer than that of xenon-124. But this rare event has never been observed. The decay time was calculated based on other processesów.